The story of a family and a Château

The story of the Château through the centuries

The castle is built on a site once occupied by the Gallo-Romans. Fortified since the High Middle Ages, it is situated on the border that separated the Frankish domains from those of Aquitaine and later, those of the kings of France from the English territories. This strategic position, particularly until the end of the Hundred Years' War, explains the size of its double enclosure which ensured its strength and durability. It was an important place for the kingdom, entrusted to the guard of people close to the kings of France: Bourbon, des Barres, Sully, Culan.

The Château has been cited in the records of Champagne since the late XIth century. The Bourbon family, descended, it is said, from a brother of Charles Martel, was the first historically known. The Château then passed to the powerful des Barres family. Pierre became the lord in 1213 and Guillaume, his brother, was known for saving King Philippe Auguste in the battle of Bouvines in 1214. The Sully family, hailing from the Château de Sully-sur-Loire, were, for more than a century, the owners of Ainay-le-Vieil, which served as a bridgehead for attacking the English during the Hundred Years'War.

Château d'Ainay-le-Vieil is one of the best conserved feudal fortresses in central France. The fortified wall built in the latter half of the XVIIIth century is a good example of the "Capetian" architecture launched under the reign of Philippe-Auguste which featured some Bourbon characteristics, since lordships were Bourbonnais titles. The fortification is octagonal, irregular, surrounded by large moats, flanked by seven cylindrical towers and featured an entrance gate with two towers. It occupies the site of a château surrounded by olders moat and built on a mound of earth. Like all fortified castles on plains, it had a second wall with a double moat and double drawbridge. The second wall, which is now gone, surrounded an area of about three hectares. Its location is still indicated on the 1830 Napoleonic plan.

During the Hundred Years' War, it was the only château to remain French hands after the defeat at Poitiers in 1356.

At the end of the Anglo-French wars, the castle lost its military interest.

Purchased from Culant family in 1435 by Jacques Coeur, the paymaster for Charles VII, and then sized from him when he was disgraced, it was purchased on December  14,1467 by Charles de Chevenon, lord of Bigny, grand master of the mounted couriers of France, i.e. the Royal mail established by Louis XI. It has been inhabited by descendants of the Bigny family, for more than six centuries.

In approximately 1500-1505, Charles de Bigny had a magnificent manor house built on the estate, a flamboyant Gothic building strongly influenced by the Renaissance .His sonClaude, governor of the Bastille in Paris, and his grandson Gilbert, majordomo for Queen Catherine de Medicis, completed its decoration. Large windows open onto the outside and a courtyard devoid of its military buildings.

The interiors are decorated with monumental chimneys.

The Renaissance oratory, built by Gibert de Bigny around 1525, is remarkable for its architecture, its sculpted decoration, its stained glass windows and finally its wall paintings, some of which date from 1610 (attributed to Jean Boucher and his workshop) and are superimposed on those from 1525. They illustrate the life of Christ.

In about 1600, two Renaissance pavilions were built facing the château on the site of the second wall; they marked the entrance to the the "Renaissance water gardens" created by the lord of Bigny who, trusted by the King's court, adopted the style of the time.

The French Revolution saved the fortress from destruction. The Marquis de Bigny was guillotined and his wife went into exile in England; his son was killed in the battle of Quiberon witch pitted the aristocrats against the revolutionary army.

In the 19th century,his nephew, Anatole de Chevenon, who was the new Marquis de Bigny, undertook restoration of the château and gardens at Ainay, in about 1855. The grounds were redesigned and transformed into a landscaped park in about 1867, fruit orchards were created in the Chartreuses and a vegetable garden created by the botanist Léonce de Lambertye, now occupies the entire Renaissance "Grand carré en l'île".

There has been an active culture policy since 1982. Expositions are held every summer and their themes are usually linked to the national celebration themes.

A storm destoyed the park in 1984 and major rehabilitation work began.

Since 1467, the castle has remained in the same family. For three generations in a row, it has been handed down by women, some of whose alliances are both prestigious and well-known. Thus, historical memories of Marie-Antoinette and the Colbert family are now part of the history of Ainay. 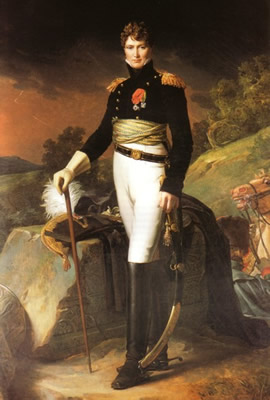 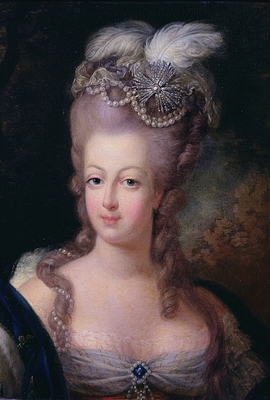 Memories of the Colbert family, from the minister to Louis XIV, to three generals of the Empire

Edmond and Jeanne de Villefranche have one daughter, Marie, who married the Marquis de Colbert Chabanais. With him, the memory of Louis XIV's minister, Jean-Baptiste Colbert, became part of the Château. His face appears on a large portrait by Lefèvre and a miniature by Petitot books are from the Colbertine library ; a key to box covered with fine stones and an enamelled snake recalls his coat-of-arms...

Three Colbert brothers, simple soldiers in the revolutionary army, became generals under the Empire. The names of two of them -Edouard and Auguste- are engraved on the Arc de Triomphe in Paris. Tableaux that the Marquis de Colbert commissioned from Lalauze, a student of Detaille, the celebrated military painter, recall their deeds and events in which they played a part. We see the General, Count Edouard de Colbert with Napoleon in the Tuileries during the Hundred Days and, on another canvas, leading the last charge at Waterloo, at the head of the lancers of the Imperial Guard. A watercolour shows his brother, General Alphonse de Colbert, saluting Madame Dupin, holding his granddaughter Aurore by the hand. Becoming George Sand, she wrote in her Memories about the general's stay in Nohant.

The Château has also conserved parts of Edward's uniform: his chapska hat, his arms and decorations, his silk tunic, lined with chainmail, and the Red Lancers uniformthat he wore at Waterloo. He had been injured the night before in the Battle of Quatre-Bras on June 16, 1815; which did not stop him from leading the attack with his arm in a sling: the silk is still stained by the wound. Auguste, the youngest of the three brothers, was the favorite of Napoleon Bonaparte, who sent him, in the 1799 Egyptian campaign, a pair of pistols and a superb compliment: " Citizen, I send you a pair of pistols to replace the ones you lost. I cannot give them to someone who would make better use of them. I salute you. Bonaparte. »

A full-length portrait by the Baron Gérard reprensents General Auguste de Colbert killed in Calcabellos, Spain in 1809 at the age of thirty-two. His brutal death (he was killed with a bullet to the forehead) is symbolized by a broken column, a horse frightened by a dark, stormy sky and a young oak hit by lightening. His son, Napoleon-Joseph de Colbert as a child, was painted by Chaudet in the scarlet uniform of the Red Lancers, the regiment commanded by his uncle Edouard. The emperor was his godfather. A display window houses the gifts he gave his godson: a box of sugared almonds with a baptism scene, two miniatures of the two empresses, Josephine and Marie-Louise, paintings on ivory by Isabey, and a Roman cameo of the Emperor Augustus with a stunning resemblance to the profile of Auguste de Colbert. He wrote a remarkable biography of his father, General Auguste.

At the end of the 19th century, the daughter of the Marquis de Bigny married Count Edmond de Villefranche, great-grandson of the Duchess de Tourzel, who had become governess to the Children of France on 26 July 1789, after the departure of the Countess de Polignac for emigration.

Discover the memories of Marie-Antoinette

This marriage brought to Ainay two objects that Queen Marie-Antoinette gave to Madame de Tourzel to thank her for her devotion. Her sense of duty, in fact, made her endure the worst dangers: she was the only one who was not of royal blood in the sedan stopped at Varenne, she was also the only one to be locked up with the royal family and Madame Elisabeth in the Temple prison. As a sign of gratitude, the queen gave her a music box: a tiny gold lyre that plays Bon voyage Monsieur Dumollet; and an amber medallion containing a fossilised spider, considered a good luck charm, which was one of the last pieces of jewellery that Marie-Antoinette wore in the Temple.

The reading of Marie Antoinette's last handwritten note to her children on the morning of her death is particularly moving.

Another, later, object testifies to the family's constant loyalty to the Bourbons: A small ivory boat, the work of the Dieppe canoeists, shows the Duchess of Angouleme, daughter of Marie-Antoinette, leaving for England in exile, accompanied by her lady-in-waiting, the Countess of Béarn, daughter of the Duchess of Tourzel, whose grandson, the Marquis Edmond de Villefranche, married Jeanne de Bigny, heiress of Ainay.